It started as a Zen garden, but the tiny dinosaurs were a necessary addition. 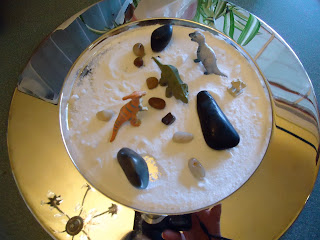 As beautiful as it was, combining natural elements like metal, salt, wood, and stone, 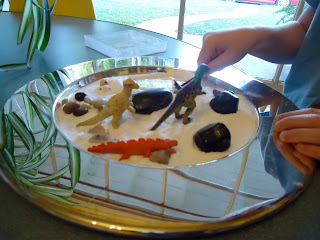 Nothing can compete with nature's play scapes, 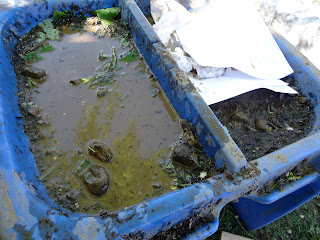 Inspired by nature, created by kids, a story behind each rock and handful of grass... 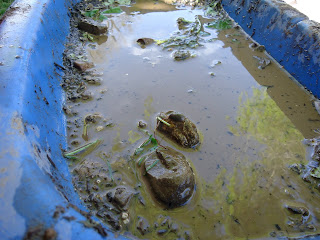 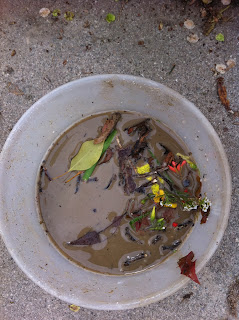 *Stephanie*
Posted by Beansprouts at April 19, 2011 No comments: 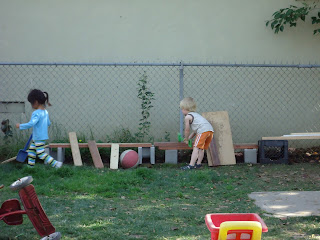 Last weekend, I went to Home Depot and bought a bunch of random plank and plywood pieces for the children to use for building (or whatever they came up with).  In the same trip to Home Depot, I purchased some potting soil and wildflower seeds, which I spread along the gate in the photo above.  If you can see in the photo, there are boards resting on top of cinder blocks over the dirt/seeded area.  The purpose of these "benches" (which have mostly been used as balance beams) was to protect my precious little seeds.  I've been carefully tending to the seeds, watering and protecting them from children's footsteps as well as the wrath of Dexter's basketball.  I have a plan, and it's for those little seeds to transform into a beautiful wildflower garden (hear the determination in my voice?).  I'm on a mission.

Well, on Thursday I saw Be leaning plywood pieces against the makeshift benches.  He had a big project going on, complete with hammering things into place (see the green shovel? It's a hammer.)  My first inclination was to say "Can you please find another place to do that because I really don't want the seedlings to get squished."  But I didn't.  I didn't because sometimes I trust the mysterious force that drives children's activities and curiosities more than I trust my own gut reactions.  My gut told me that those planks and boards would squish the life out of the poor little seedlings.  My brain told me that Be was deeply engaged in a creative and planning process and to inhibit it would inhibit whatever neural growth was happening as a result of the activity.  Equally it would rob him of the efficacious feeling resulting from the completion of his task, whatever it was.  So I bit my tongue.  I practiced self-inhibition.

Twenty minutes or so later, Be asked me if there was any more plywood.  "I'm not sure," I said.  "I'll let you know if I see any.  What's it for?"  His response, calm and informing, almost made me cry.

"I'm building a wall so your flowers don't get squooshed."

*Stephanie*
Posted by Beansprouts at April 03, 2011 No comments:

Wrestling is good for children.

Originally published Sept 2010 Many of our parents seemed shocked when they came to pick up their children from Beansprouts and found the...